Archive for category: Top Father Of The Year Award

You are here: Home / News / Social Marketing / Top Father Of The Year Award

The initiator of this prize is Prof. Dr. Ulrike Detmers. 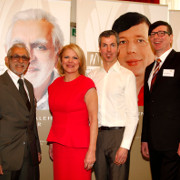