Organic products are enjoying ever-increasing popularity with consumers. In order to be able to label their own products with the government-recognised organic logo, producers have to meet much stricter requirements than apply to conventional products.
For organic breads these regulations apply from the production of the cereal crop to the production process in the bakery. 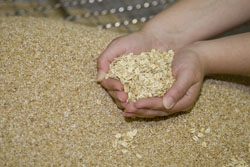 Organic bread is identified by the government’s hexagonal organic logo. Government-recognised organic certification bodies [Note: DE-ÖKO-001] regularly check all stages of production at the organic farms, at the mill and in the bakery to ensure that they are sticking to all of the regulations.