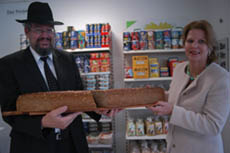 Rabbi Tuvia Hod-Hochwald and Prof. Dr. Ulrike Detmers, Shareholder, Member of the Management Board and Speaker of the Mestemacher Group, Gütersloh.

Gütersloh (WB). There’s a Rabbi baking at Mestemacher. The Gütersloh producer of wholegrain breads and international speciality breads is happy to welcome him. Without the blessing of the Jewish religious leader, Mestemacher would not be able to sell one crumb in Israel.

It is not enough to simply bake the bread unsoured. A Rabbi must light the oven in which the bread is to be baked. Not just any rabbi, but one recognised by the chief rabbi in Israel. After his visit to Gütersloh he fills out a certificate which may say something like, “I hereby certify that I have checked the ingredients, production and packaging process of all bread varieties produced by Mestemacher GmbH. I found that they do not contain non-kosher ingredients nor have they come into contact with such substances. They are therefore kosher and parve for the whole year with the exception of the Passover festival. This certificate is valid until the end of September 2008.”

Rabbi Tuvia Hod-Hochwald has been filling out certificates like this for Mestemacher since 1994. He comes once a year from Bad Kissingen and checks whether the production process has changed in any way. At the end of his visit the rabbi “lights” the oven – he presses the switch in the production hall. “After this I have to promise him not to let the oven go out at all over the coming year,” says Managing Director Albert Detmers, who keeps strictly to this rule.

“Without this certificate we would not be able to place our products in any Israeli supermarkets,” explains Prof. Dr. Ulrike Detmers, Shareholder, Member of the Management Board and Speaker of the Mestemacher Group. We would lose a high, six-figure turnover. “Six and a half million potential customers live in Israel, of whom many are Russian Jews who grew up on Vollkornbrot,” summarises export head Helmut Knoblauch. Of even greater interest is the American market with ten million potential consumers. Knoblauch says, “Over there, kosher products have a particularly good reputation. A reputation almost as good as our organic label.”

So, according to the certificate the Mestemacher bread is kosher, meaning that it is permitted by Jewish religious law. But what does “parve” mean? Rabbi Tuvia Hod-Hochwald, one of three authorised experts for Jewish food laws in Germany, replies, “It means neutral. The central tenet of the Jewish food laws is the separation of meat and dairy. Bread is neither meat nor dairy. Therefore it is parve. And it can be eaten with both – meat or dairy. But not at the same time.

Written by Stephan Rechlin, published in the Westfalen-Blatt Gütersloh District on 15.03.2008 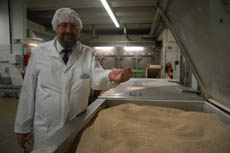