You are here: Home / Company / History

The story of the Mestemacher bakery

The story of “Wilhelm Mestemacher Pumpernickelfabrik” began in 1871 in Gütersloh as a town bakery at Eickhoffstr. 2 (formerly Bahnhofstr. 497). The master shoemaker Johann Heinrich Mestemacher established a bakery there for his 20 year-old son and master baker Wilhelm. After the primary school, Wilhelm Mestemacher attended high school for some years and then started his vocational training at his father´s request.

The increasing urbanisation coming along with industrialisation had a positive influence on the growth of the family business. Home production in the households was decreasing. There was an increasing demand for food produced away from the home in the cities. In Gütersloh, the number of inhabitants started to increase with the industrialisation of textile manufacturing in the 1870s. Between 1871 and 1890, the population increased from 4,300 to 5,917 inhabitants. 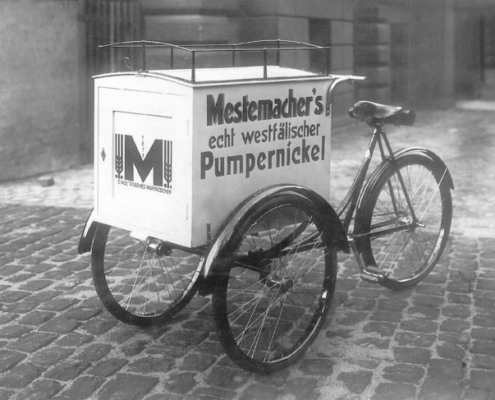 The family enterprise Mestemacher specialised in the transport and dispatch of the pre-cut pumpernickel. The delivery over far distances was made possible by the development of a method of pasteurisation for bread in cans. This was accomplished by the former Westphalian pumpernickel maker “Sökeland” in Berlin in the year of 1896. Such bright prospects also persuaded other bakeries in the Westphalian area to get specialised. Along with Wilhelm Mestemacher, Modersohn in Lippstadt for instance established a pumpernickel plant with a mill in Lippstadt. Wilhelm Mestemacher left the town bakery to his eldest son and master baker Emil, and also constructed a new residential building next to the new company with the address “Am Anger 16”. Shortly afterwards the founder of the company died in March 1911.

Sofie Mestemacher and her sons – the company is expanding 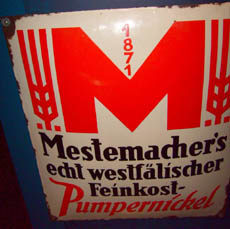 The wife of the master baker, Sofie Mestemacher née Wulfhorst, took over the management of the pumpernickel bakery as a widow in 1911. She led the young enterprise through World War I. Lack of raw material made it difficult for many bakeries to survive. Sofie Mestemacher responded to the lack of wood by purchasing coal-fired ovens. After the war she shared the responsibility with her sons Emil, Heinrich and later also Paul. Emil in the bake house, Heinrich initially in the accounting department and later in the management together with Paul. War and inflation did not seem to have impaired the company, as this was rather helpful by melting down the debts.

The company´s success was represented in busy construction activity. In the nineteen twenties a warehouse was built with an attic and an “open shed”, and the bake house was enlarged. Having their own mill was the pride of the company. Meanwhile the pumpernickel bakery also supplied customers abroad and made a name for itself, because an expensive registration of the trademark was accomplished in 1924 at the patent office to protect the trademark from utilisation by other companies. The most important target countries of German export of finished and semi-finished goods were the Netherlands, Great Britain and the USA.

With a large advertisement in the publication on the city´s anniversary in 1925 the company was able to draw attention to itself. In the beginning of 1936 Sofie Mestemacher left the pumpernickel plant to her managing sons Paul and Heinrich, who changed the sole proprietorship into a general partnership. However, the joint business only existed for a short period, because Paul Mestemacher died at the end of the same year. His wife Katharina, née Ricklefs, now entered the partnership as an associate and the management was solely by Heinrich, who exercised it until his death in the year 1943.

The company now lacked a businessman familiar with the matter. None of the heirs was able to accept this task. The oldest brother Emil, former owner of the town bakery, died only a few days after Heinrich. The only remaining brother, Ernst Mestemacher, was indispensable as a technical director of a Berlin engineering company and managed the business of the pumpernickel plant from afar. The only member of the family familiar with the enterprise was the 19-year-old granddaughter of the company´s founder, Lore Mestemacher. Following her exam as an assistant merchant, she worked in the business as an accountant. At the behest of her Berlin uncle, she attended further training classes to expand her knowledge in the field of production. The widow Klara Grabemann, née Mestemacher, who returned into her parent´s house “Am Anger”, decided to restructure the company. As her other remaining brothers and sisters, she was an associate of Mestemacher OHG since the death of her brother Heinrich. Klara accepted the debts, which otherwise had to be paid by all individually liable partners. With this engagement, she had the desire to get the majority of the shares she wanted to pass on to her niece Lore Mestemacher. Following the advice of a lawyer assigned with the transaction and new co-partner, the company´s legal structure was changed to a limited liability company (GmbH) in the course of restructuring. A new master baker who worked as a managing director in the production department restored the weakened company for special bread to slow growth by means of new products.

The lawyer who took a share in the limited liability company arranged the contact to an entrepreneur of the food industry from Hamburg in 1956. Willy Schittenhelm took a share in the company and became a managing director along with Lore Mestemacher. His knowledge and ideas accelerated the economic growth of the company. He knew food-exporting companies to establish a sales cooperation with the limited liability company.

In the national business Schittenhelm was able to acquire the department store chains as customers, which were constantly growing since the 1950s. The idea of the small round slices of pumpernickel, offered as “cocktail nickel”, promoted the sales. Meanwhile the business partners also became a couple in private. The expansion of business could also be seen, among other things, with the purchase of a teleprinter, enabling quick correspondence with remote places. A large new building and the modernization of production and packaging department represented signs of growth. The company increased from approx. 50 employees in the year 1950 to around 120 employees in 1965. At the age of 70, Willy Schittenhelm decided with his wife and the sons who did not want to succeed him, to sell the company.

Both sold their family business to the family enterprise Detmers from Bielefeld Jöllenbeck, whose fresh bread delivery service was sold for reasons of market strategy. Since the acquisition by the family enterprise Detmers, Mestemacher has clearly developed as a market leader for packed and sliced wholemeal bread specialties. Mestemacher completes the choice on the bread shelves, because we supplement the range of packed bread from supplying bakeries.

The further shifting of instant supply, sliced wholemeal bread and ethnic-food-type bread to food retailing and the growing awareness for healthy food as well as our vanguard launch have also brought forward growth. The external factors are thus supplemented by innovations, good relation of price and quality as well as additional benefits as plenty of dietary fibres, optimum supply and promotion of fitness and vitality.
However, also the change of culture and society favours our growth. The change is characterised by:

As a niche supplier of wholemeal bread specialties and international baking specialties/ethnic food, the Mestemacher wholemeal bakery is the ideal supplement to the full range in the food retailing. The price/performance is in an optimum balance. The customer gets multiple benefits for an attractive price.

Since 1994 Mestemacher has made a name for itself as a sponsor of projects of common welfare. The social marketing activities are